Garmont commits to “Save the Rhino” in South Africa. “Rediscovering wildness is key to a brighter future” 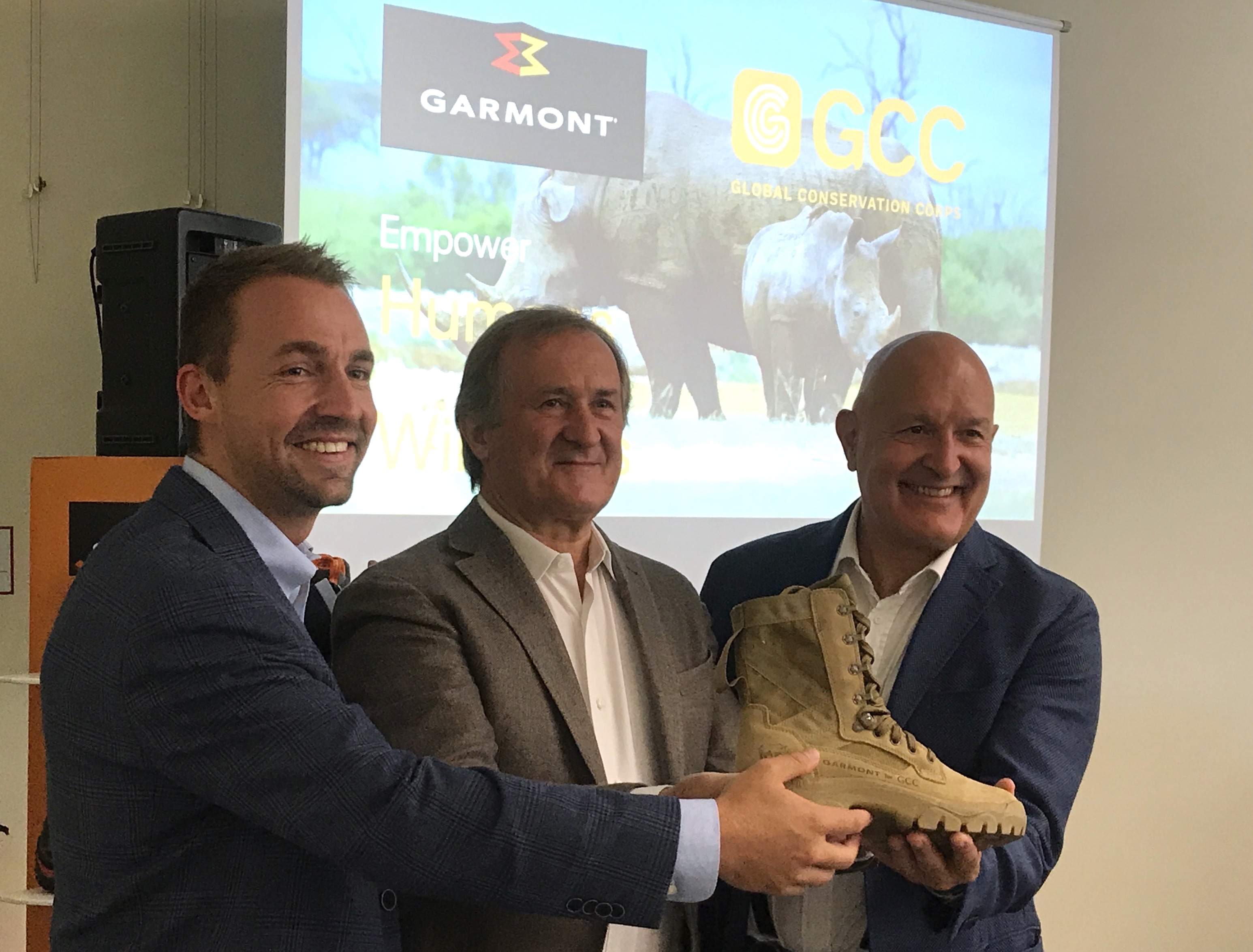 The Italian company based in Vedelago (Treviso) explained its partnership with GCC as the beginning of a new phase for the company: a structural commitment in the pursuit of a better, safer and brighter world through the preservation of the natural environment and the creation of opportunities for people to reconnect with nature and wildness to become positive influencers in building a sustainable future.

The partnership sealed between Garmont President Pierangelo Bressan and GCC founder Matt Lindenberg marks the first step on the new path, clearly mirroring the way Garmont envisions its commitment in the coming years. 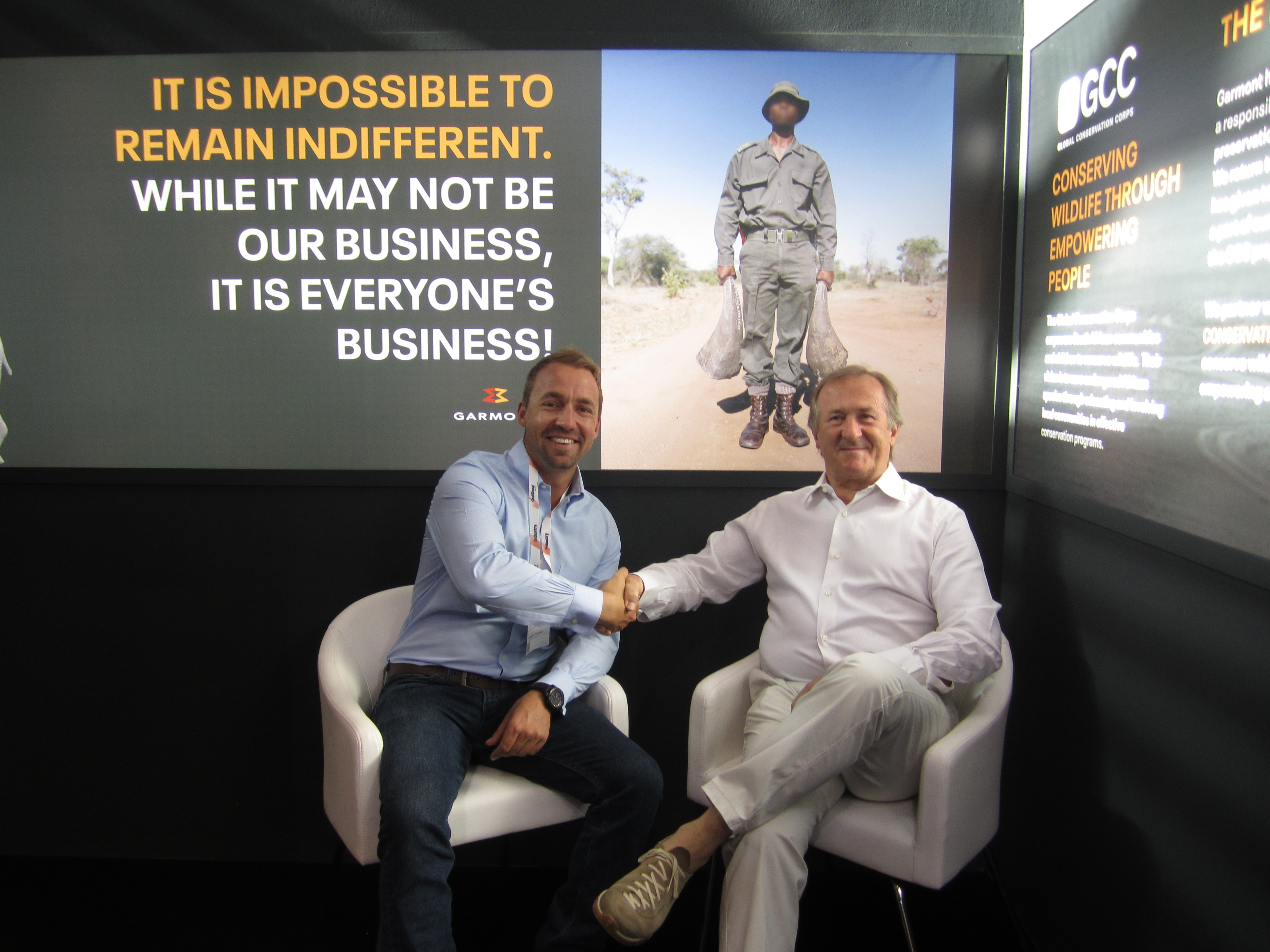 GARMONT AND THE GLOBAL CONSERVATION CORPS

It is a sad fact that many species are under threat of extinction due to different factors – from global warming to deforestation to other causes. This includes some of the most iconic African wildlife species, such as rhinos and elephants, that are disappearing at an intimidating rate. For these species in particular, though, the main factor behind this threat is poaching.

For rhinos, the figures are particularly impressive, and the reason is in their horn. Rhino horns are believed to have curative power in some cultures (though there is no official scientific evidence of this) and represent a symbol of success and wealth in others: the specific value of rhino horns is greater than gold on the black market.

This has led to an increasing scarcity of rhinos, which in turn drives higher prices and puts pressure on the local populations. Poaching a rhino can be life-changing for people living in impoverished communities where gainful employment is rare.  When faced with the short-term solution offered by poaching, it will be difficult to influence their decision if they have not been exposed and educated to wildlife and the longer term benefits of conservation. Unless the local communities are involved in effective conservation programs, it will be difficult to change this behavior.  On average, 3 rhinos a day are poached in Africa: at this rate, rhinos will become extinct by 2026.

The Global Conservation Corps (GCC) has committed itself to investing in both people and wildlife to tackle the poaching crisis, empowering the rangers, conservationists, and communities of South Africa to defend and benefit from their national heritage. To save the rhinos and fellow wildlife species by working with communities neighboring national parks to take ownership of the animals surrounding them.  If people are educated and exposed to wildlife, they’ll protect it. This is the mission that Matt Lindenberg had in mind when he founded the GCC in 2015, and that inspired Garmont to get involved.

“The real tragedy is that, as odd as it may sound, the majority of South Africans have never seen iconic African wildlife before,” Lindenberg said. "How can we expect communities to place value on wildlife that they have never seen, and that is now worth more dead than alive?"

“Due to this disconnect from their national heritage and the poverty of communities bordering national parks, illegal poaching finds fertile ground. The decision to kill an animal for money can easily eclipse the value of conservation if they are unable to derive a direct, tangible value from that wildlife and related tourism.  And that’s why establishing a love for wildlife from a young age is fundamental to inverting this fatal trend.  If you don't love something, you won't protect it.” 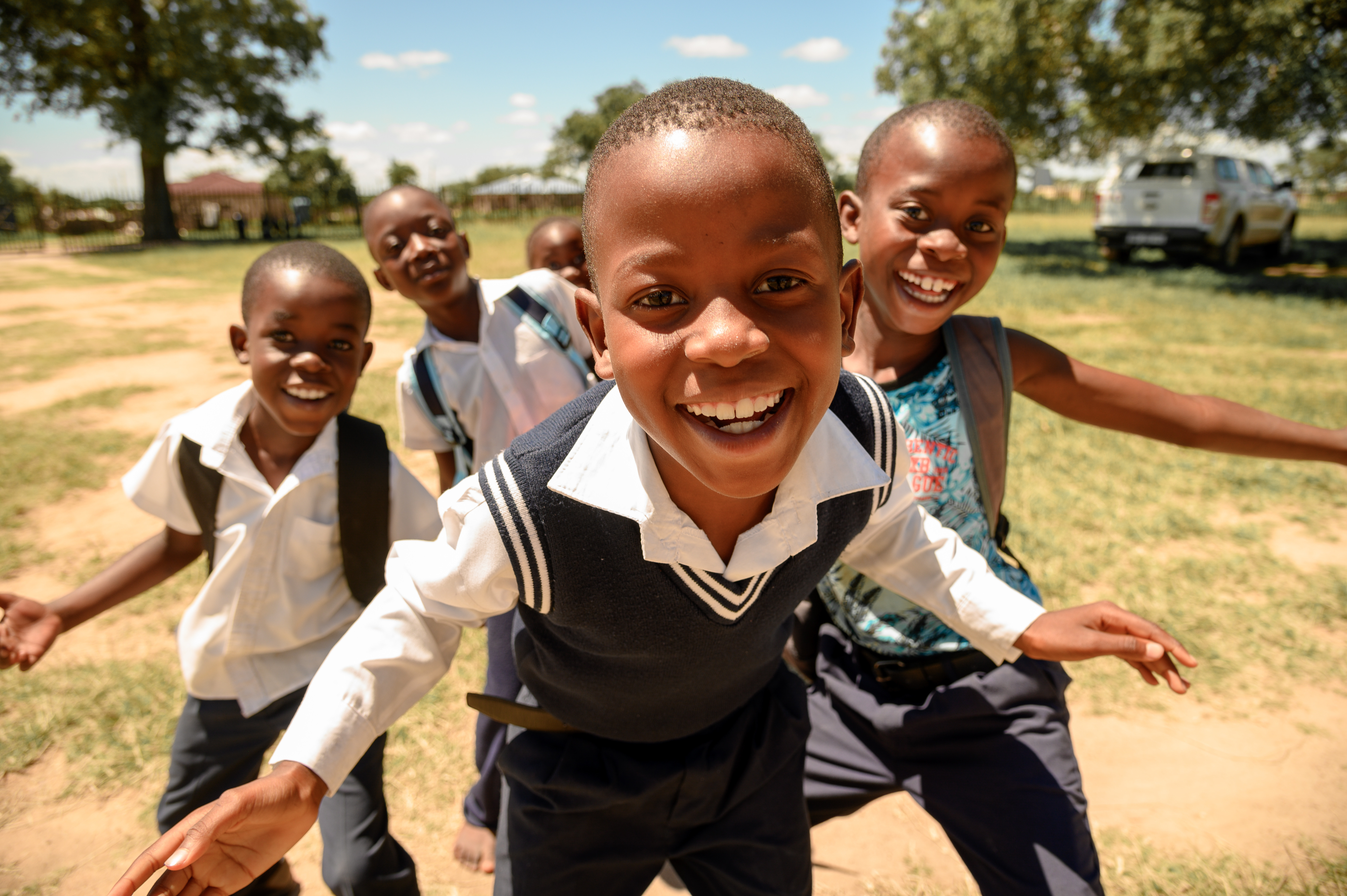 FROM VENETO TO SOUTH AFRICA, MAKING A DIFFERENCE

Garmont backs GCC in its main initiatives and helps raise global awareness through its communication efforts.

“Rhino Man – The Movie” is the title of the documentary film realized by GCC that shines a light on the heroic rangers that put their lives at risk every day to defend wildlife and give future generations an opportunity to see these animals in the wild. They are the last line of defense between the survival and extinction of rhinos, elephants and other iconic animals. Garmont will supply the rangers with quality footwear that provides comfort and protection during their long periods of standing and walking.

But the Italian company also actively contributes to the GCC project “Future Rangers Program”, officially launched in January 2019. Through this program, GCC engages school children aged five through eighteen from rural communities with the goal of building their awareness and love of nature by teaching them about careers in conservation, the value of wildlife and how to become a custodian of their national heritage. The most passionate learners are rewarded with the opportunity to meet rangers, go on walks, game drives and to see Africa’s iconic wildlife for their first time.

Thanks to Garmont’s support, the program will double the number of schools and children involved in the project, including the full-time employment of educational facilitators from the local communities.  This means that thousands of children will be offered a conservation curriculum every single week and have a chance at leading a meaningful future career in conservation.

“THAT’S EVERYBODY’S BUSINESS”:
A MESSAGE TO SMALL AND MEDIUM-SIZED ENTERPRISES

“As incredible as it may sound, an Italian company will help empower thousands of children in South Africa to learn about conservation and get back in touch with wildlife: that’s really humbling for us,” stated Pierangelo Bressan, President of Garmont International.

“Garmont has been developing premier performance footwear for mountaineering, hiking and other outdoor pursuits for over fifty years. It is fair to say that without nature, without the environment, without that ‘wildness’ that inspires our ‘Stay Wild’ motto, there would be no Garmont, and that’s something we should not take for granted. Can you image that children born after 2026 might grow up without ever knowing the rhino if not in books? That’s reality, not fiction: I think we need to do our part to avoid this. It is time to give back, both to nature and to the future generations.”

“I strongly share Matt’s vision – Bressan continued – in believing that the real difference is in empowering people through education, development and training.  That is what we are doing with GCC, and what we aim to do in future projects in the coming years: create bridges and remove obstacles for people to reconnect with nature and rediscover their ‘stay wild’ attitude. We want to drive the passion of every outdoor lover to push the mental barriers of ordinary life, and find it in their everyday – whatever that may be. This is the philosophy behind our “stay wild” motto. Because you don’t have to be extraordinary to do extraordinary things. That’s the spirit that led us to South Africa, to become involved in something that apparently has little to do with our business.”

“But let me tell you: this may not be our business, but it is everybody’s business. And I hope that companies at every level – also small and medium-sized enterprises like Garmont – realize this before it is too late. That’s the only way we can hope to thrive in the future – and again, I am not talking only business,” concluded Bressan. 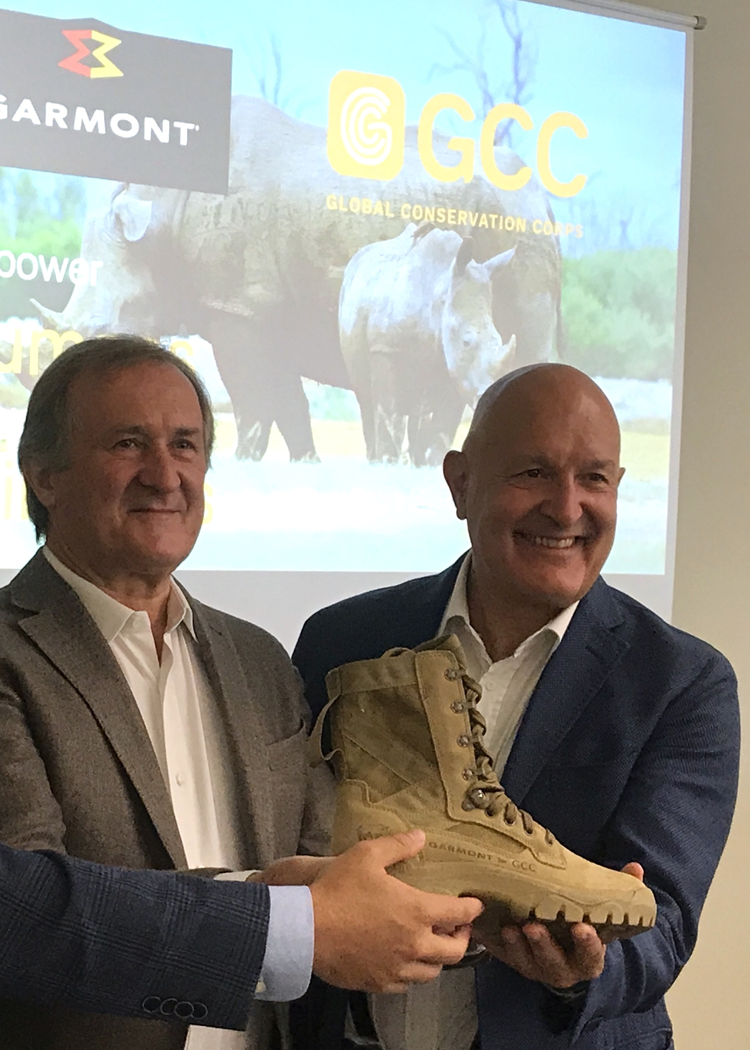 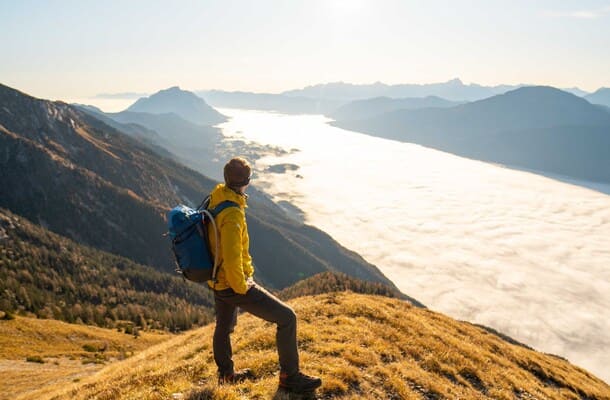